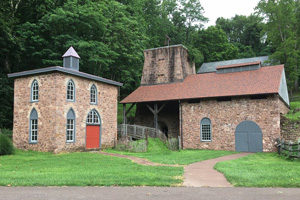 Nestled in an area rich with iron ore, abundant woodland for charcoal, limestone, and waterways to provide power, lies Joanna Furnace — a historic remnant of Berks County’s thriving early iron industry.  Unlike today’s corporations with their large buildings and complex hierarchies, the 19th century iron industry at Joanna Furnace was the product of rugged individualism. From the semi-wilderness of Robeson Township, in 1791, Joanna Furnace was started by Samuel Potts, Thomas Rutter III, Thomas May and Thomas Bull. The furnace was named in honor of Pott’s wife Joanna Holland Potts.

Joanna was a cold blast, single stack, charcoal iron furnace most of her life. Water powered until the mid 1850’s, Joanna used steam power after that. Under the guidance of the ironmaster (after 1800, one of the Smith family) and founder/keeper (or manager), guttermen, fillers, and potters worked in twelve hour shifts tapping the iron twice daily. The average blast was one year, but some blasts lasted two or three years. During a blast, the fillers and guttermen worked every day of the month, including Christmas and New Year’s Day. Woodcutters, colliers (charcoal makers) and teamsters added to Joanna Furnace long and productive life.

The Charcoal Barn was rebuilt, after an 1856 fire, with additional height and storage area. 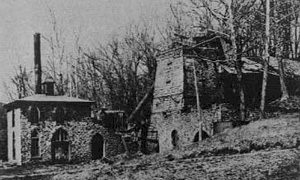 A major technology change occurred in 1889. At this time, fifteen feet were added to the furnace stack height (increasing it from 30 to 45 feet). A Weimer blowing engine, downcomer pipe, blowout door, and bell and hopper (of which the derrick/crane is still visible on the top of the furnace) were installed. In order to facilitate getting the iron ore, limestone and charcoal to the top of the stack, a water hoist was installed on the outside of the stack between the Bridgehouse and Furnace Stack.

At the 1898 death of the ironmaster, L. Heber Smith, the furnace was never again operated. 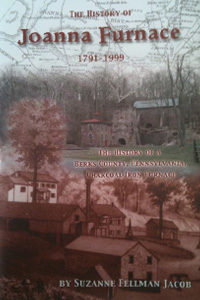 Joanna Furnace is two miles from Morgantown on the Berks, Lancaster, and Chester Counties border. Named for a spirited Joanna Holland Potts, wife of one of the four original owners, Samuel Potts.

This DVD takes you back to George Washington’s time when Berks County was a major supplier of iron. Experience the story of Joanna Furnace like you could not possibly have imagined. The highlights of this video include:

Christmas is around the corner. If you’re looking for that perfect gift for the history buffs on your list, look no further.